For the show Re-Visions, San Francisco based artists Danielle Satinover and Gregory Vernitsky bring a school of creative thought together. Both artists take a similar approach to the idea of found materials and come from a background where the financial ability to source materials for work was very limited. Vernitsky, originally from the Soviet Union with limited resources to artist materials, and Satinover by a lifetime restricted by socio-economic circumstances, have instilled in them the skills to see something in the ordinary and often discarded. Both artists have been able to see beyond the ordinary to discover new interpretations.

Vernitsky combines carved and painted found wood, tossed metal, and plastic into a joyful play with time, scale, and narrative. Concepts and structures of public art, relativity of meaning, and reflection on human frailty and feelings, are realized through his innate ability to see possibilities in things as simple as a block of wood, or grace in a rusty scrap of metal. 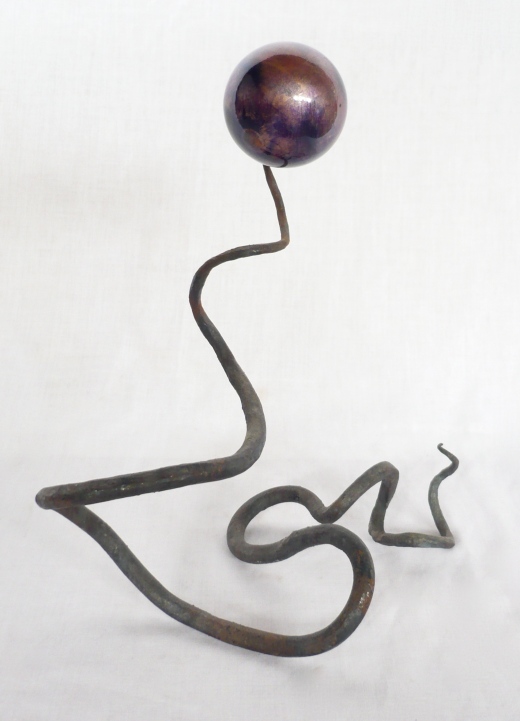 Satinover also plays with concepts of the human condition but focuses more on the connection between humans and our environments and structures.  She often takes discarded man made items to create abstract forms. Her current work has been more descriptive, but still plays with the tensions between man’s creations and natures.

Both Vernitsky and Satinover often approach their subject matter with a sense of lightheartedness. This ease with which they come to their subject matter does not take away from the significance of the work, but rather adds a dimension to the story telling and gives the viewer a place to reflect on the history of the object as well as the new vision given to it by the artists. In the end, these two artists take discarded material and use it to bring us back to ourselves and reflect on our humanity and our connections to our surroundings and each other.

Join them in celebrating this journey at the opening reception Friday, July 12th from 5-7pm. For a more in-depth exploration of the artists’ processes, an artist talk will be held Saturday, July 27th from 1-3pm. Try your own hand at their process with an art making session August 10th from 1-3pm; finally, Re-Visions will end with a closing reception Saturday, September 7th from 1-3pm.

last day to viewOctober 21, 2020
This show, featuring works of Chad Moore and Laura Diamondstone has ended. Look for a new show to open on November 7th, 2020